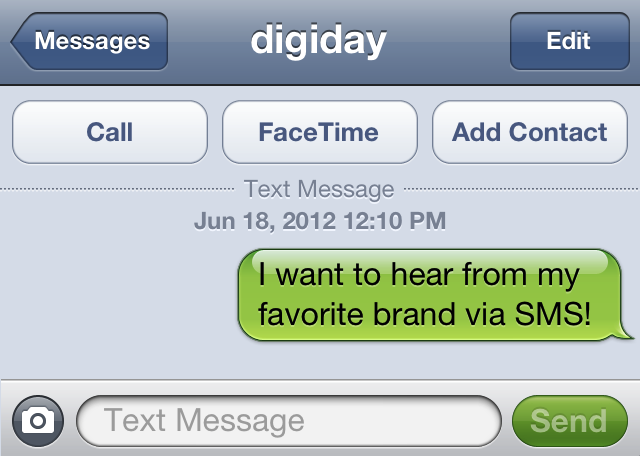 Text messaging was once thought of as the belle of the mobile ball. Then, with the proliferation of smartphones and tablet devices, everyone became app- and mobile Web crazy, forgetting about the fact that every consumer with a mobile phone — smartphone or not — has the ability to send or receive a text message.

Beyond the reach, SMS should be attractive to marketers because it works. The proof is in the pudding, as they say, with marketers claiming they’ve even been able to boost sales via SMS programs. For example, Planet Hollywood Resort & Casino has used SMS to bring new customers in, keep them gambling and encouraging sign-ups to its “A-List Players Club” rewards program. Four SMS calls-to-action were placed around the property, prompting users to text-in to a different keyword for each placement. Users were encouraged to text-in for a chance to win various prizes, receiving a second opt-in triggered auto-response that included the following gaming offer: “$10 in FREE slot play for new A-List sign-ups. Visit the Players Club booth & show this msg to redeem.”

At the end of the short pilot program, the calls-to-action generated a total of 514 text-ins and 348 total opt-ins for Planet Hollywood, resulting in a 70 percent success rate. Out of the total opt-ins, 237 were served the gaming message encouraging Players Club sign-ups and offering $10 in free slot play. With 34 new sign-ups, Planet Hollywood saw a 13.5 percent new player conversion, with 17 of those playing beyond the $10 in free play associated with the campaign. In the end, the casino generated $2,809 in new revenue, along with 34 new additions to its Players Club program.

Another SMS success story is a Domino’s Pizza franchise in Charlotte, NC. The pizza chain wanted to get consumers to like it on Facebook, so it could push deals and offers out to fans.

The pizza chain had traditionally advertised the franchise’s Web address, which redirected to the Facebook group, on the big screen and other displays in the University of North Carolina’s basketball arena. The arena’s announcer read the advertisement while it was displayed. The spots typically lasted between 30 and 60 seconds. The problem with this approach, however, was that most students are not going to jot down a URL during a basketball game. While many students have smartphones, they were unlikely to spend a couple of minutes during a basketball game to visit the Facebook group. On the other hand, taking a couple of seconds to send and receive a text with the URL of the group makes sense. After the game ended, students could then review the text and visit the Facebook group on their smartphones or computers.

To kick things off, the pizza chain created a new ad for the arena displays, offering a free pizza to anyone who texted 49ER to 313131. They received the following response, “To get FREE pizza, join our Facebook group at UNCCDominos.com. Once you join, post a message (I GOT A TEXT) & you will get FREE pizza code Reply STOP 49ER 2 Optout.”

Roughly 10 percent of the 3,000 students attending the game texted in within a few minutes — and another 5 percent did so by the end of the night — resulting in nearly 600 opt-ins. Approximately 350 students had joined the Facebook group by the morning. Nearly all of them redeemed the offer. The response to the advertisement confirmed that texting was dramatically more effective at driving conversions than simply displaying a URL. The pizza chain revised its creative for subsequent games, offering deals like discounted pizzas. Every time the SMS ads ran, the pizza chain saw 100 to 200 opt-ins, nearly all of whom also joined the Facebook group to get the deal.

By the end of the semester, the Facebook group had collected nearly 2,000 fans. They had also added over 850 students to its SMS marketing list.

“The sales at the store when we send text messages, or [use them to] drive people to Facebook, are unprecedented,” said Ryan Swanson, area director for Prairie Pizza, a Domino’s franchise in Charlotte, NC.