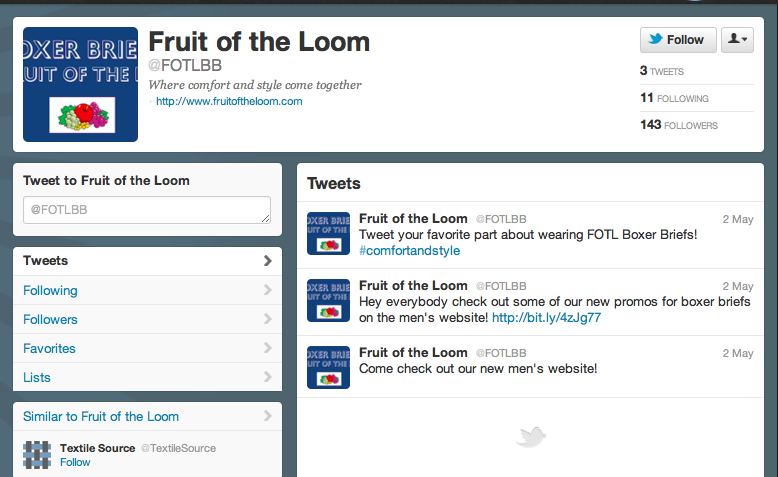 In an age when consumers are so obsessed with Facebook and Twitter, there’s no excuse for companies not to be active in social media. And yet some pretty well-known brands are still mostly sitting it out. Here’s a look at three that caught our eye.

Fruit of the Loom: Fruit of the Loom has only about 20,000 consumers following it on Facebook, with just 283 people talking about the brand. The underwear maker posts every few days, not daily. The comments it does post rarely break 10 comments back from consumers or likes, so there isn’t a lot of engagement going on on the brand’s Facebook page.

On Twitter, Fruit of the Loom isn’t doing any better. The company has only 163 followers on Twitter and has tweeted only three times since it started the account in May last year. I know what you’re thinking. Who in their right mind wants to follow an underwear brand on Facebook or Twitter? You’d be surprised.

Hanes, Fruit of the Loom’s direct competitor, has about 2.5 million likes on Facebook and 7,000 people are talking about the brand. There’s a lot more engagement on the company’s Facebook page than Fruit of the Loom has. People are engaging with Hanes and other Hanes fans on the Facebook page, with thousands of comments and likes. Hanes has 6,400 followers on Twitter, with 1,500 tweets. C

Goldman Sachs: Let’s face it, being a global financial juggernaut isn’t the formula for popularity nowadays. Goldman Sachs has fewer than 15,000 fans on Facebook. That’s fewer than its employee base, so you could actually surmise that many of its own high-paid employees don’t even like Goldman. The company is keeping on brand in an important way: it’s very discrete. This might not be the formula for success in social: it has never posted and only 117 people are talking about the brand.  Credit Suisse, Goldman’s direct competitor, has about 40,000 likes on Facebook and 7,695 followers on Twitter. The company posts several times a day on both Facebook and Twitter, resulting in better engagement from consumers than Goldman Sachs on both Facebook and Twitter.

Kimberly-Clark: Consumer package goods companies often take a backseat to their stable of brands. Kimberly-Clark, owner of Kleenex, Huggies, Scott and Cottonelle, is staying in the background, with only 29,000 likes on Facebook and just over 2,000 people talking about the brand. When compared to competitor Unilever, that’s chump change. Unilever has 242,000 likes on Facebook, with 3,400 people talking about the brand. On Twitter Kimberly-Clark has just under 2,000 followers and has tweeted 322 times. In comparison, Unilever has almost 15,000 followers on Twitter and has tweeted over 2,000 times. Traditionally, parent companies of CPG brands would often be in the background of marketing communications, placing their consumers goods brands at the head of all efforts. But, Kimberly Clark is doing so much in terms of sustainability and is running sweepstakes and such that could easily be promoted through its social media assets. Having a presence via social is definitely important.