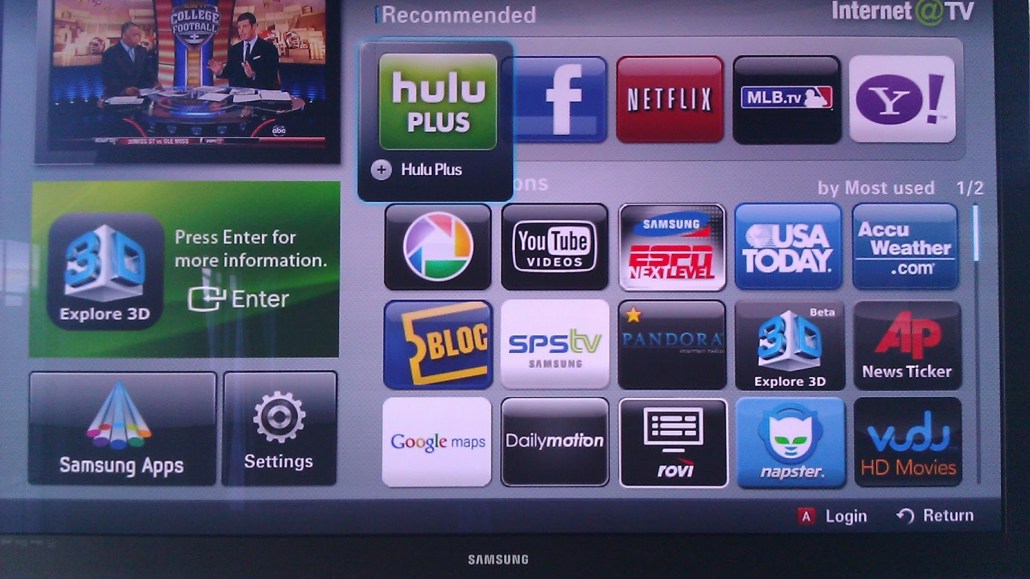 There were enormous signs all over the Las Vegas convention center reading “Samsung: The Future of Smart TV. Now.” And yet I was left wondering if TV is or ever will be ready ready for that.

I finally got to see a Samsung Smart TV in action, along with several other TVs loaded with apps, and came away with more doubts than assurances that I’d glimpsed the future. I don’t know anyone from my “normal people” friend pool who is dying for apps on their TV or even who knows they have actually purchased a connected TV.

We saw how the original incarnation of Google TV failed when it tried to push a full browser of the TV — so apps make a lot more sense in some respects. But we’ve also seen Yahoo in the connected TV space for half a decade, with little traction to show for it.

TV manufacturers are pushing hard to own the central hub of the TV viewing experience. So is Xbox. So are the cable companies, as well as Google. But during my demo of Samsung’s app interface, I fixated on a serious — though perhaps temporary — shortfall in this model. The smart TV treatment still doesn’t negate the need for using an electronic programming guide.

For example, via Samsung’s interface, you can search for specific movies available, and you’ll come up with a list of titles from Netflix, Hulu Plus, Vudu, etc., based on whatever subscriptions you pay for and apps you have downloaded. But it’s incomplete. If you want to see what movies are available through your cable provider’s video-on-demand offering, you’ve got to go back to your electronic programming guide, which you probably use already.

Sure, people can get used to new entertainment delivery options in a hurry — see Netflix streaming and iTunes — but the habit of using a guide to flip around their TV lineup is hard to break. That is, if you aren’t the type to still flip aimlessly with no guidance at all, like my parents. Also, you have to expect cable to up its game, squeezing more Web content into its programming guides.

So where does the promise of apps lie? Originally, apps exploded on mobile devices because they served a need. Web browsing was more challenging on small phones, and apps provided pared-down, optimized versions of your favorite sites. TVs have big powerful screens where mini-Web programs seem less necessary. Plus, is it that hard to change channels on the average TV?

One argument I’ve heard is that younger demographics are so used to an iPhone-like app layout that they’ll be the ones adopting TV apps the fastest. They think in terms of Web snippets and individual shows, not a vast TV lineup or even just surfing the Web. Perhaps.

Another potential accelerator to TV-app adoption is the availability of Web content on the big screen. “Maybe that gets users to break their remote habits little by little,” theorized Dave Massey, Digitas’ svp of media. That makes more sense to me, particularly in environments like XBox Live, where Web content from YouTube fits the connected device’s ethos perfectly. Or I can see the kid who’s seriously into “Fred” getting the family to discover they’ve got a whole bunch of other apps on their TV.

YouTube’s new array of channels is unlikely to be enough to get people to start accessing apps from their TV regularly. That’s a major leap of faith. The quality of that content remains to be seen before we can declare it Must-App TV.

TV manufactures are also unlikely to have the stomach to stick with smart TV for the long haul. One venture capital executive I spoke with said no. “These guys aren’t good at this,” he said. “They don’t do software or programming. I don’t see them sticking with it.”

If they don’t stick with apps, will anybody?