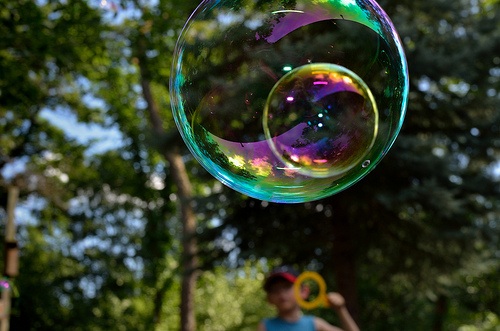 Silicon Valley Bubble Watch: Sean Parker, the Silicon Valley royalty behind the rise of both Facebook and Napster, is sounding the alarm. There’s a bubble in the Valley, and it’s caused by too much easy money. Parker’s thesis is an interesting one. There used to be too little early-stage investment capital to help startups get off the ground. Now, the reverse is true. That’s led to any engineer worth much being able to secure $250,000-$500,000 to start a company that probably shouldn’t exist. The trickle-down effect of this is legitimate companies have a talent shortage as engineers dream of being the next Mark Zuckerberg. Like all bubbles, this one is destined to end suddenly. CNET — Brian Morrissey  @bmorrisseyFacebook, A Place for Publishers?: CNET’s Molly Wood opines that perhaps Facebook’s sudden affinity for publisher’s apps has a downside. She thinks that sharing online is beginning to feel like an exercise in branding. Controversy erupted earlier this year when Facebook launched its sponsored stories, plucking certain posts from news feeds and hosting them on a brand-centric  pages. Now news apps are interrupting the share experience with requests to sign up for another Facebook-connected marketing ploy. Can Facebook be losing some of its social side in a bid to be more publisher-friendly? The backlash hasn’t started just yet, but the social behemoth needs to get back to its roots before it sparks a legitimate revolt. CNET— Carla Rover @carlarover

YouTube to Real Tube?: Fred, the annoying squeaky-voiced YouTube star, got a Nickelodeon special and then a movie. Now, according to AllThingsD, Cartoon Network has snagged the rights to The Annoying Orange, another hugely popular YouTube series which has demonstrated the ability to draw a large, consistent audience. Are we on the cusp of a YouTube talent war? A few years ago, before the recession took hold, several of the major broadcast networks started trolling YouTube for talent, including NBC’s deal with the comedy duo Barats and Bereta. Now there are far more Web video producers to choose from, including Ray William Johnson, who just crossed the five million subscriber mark. Are the broadcast networks paying attention? All Things D— Mike Shields @digitalshields

Focusing on the Future: The premise of “Person of Interest,” one of CBS’s new fall dramas, is that a program that uses a complex algorithm that recognizes patterns occurring on computers around the world can predict the near future. That’s not too far off from the  services a company called Recorded Future provides. The company  looks at 100,000 Web pages an hour, scanning across 50,000 sources that include everything from Securities and Exchange Commission filings to Twitter comments in order to discern information about the future. Until recently, the company, which is funded in part by Google’s venture arm, provided hedge funds and investment banks with insights to the tune of $9000 per month. But now the company has begun selling a web-based version of its product for $149 per month. According to Quentin Harvey, author of this report in the Times, a look backwards and forwards turned up some eerily accurate connections from which some lucrative predictions might have emerged.  NYT— Anne Sherber @annesherber

Labels Aren’t Happy With Spotify: Despite its growing popularity with users both in the U.S. and across Europe, Spotify is failing to satisfy some of its label partners, and over 200 have decided to pull their music from the service. Although the subscription-based streaming service argues its model encourages users to at least pay something for access to recorded music, as opposed to downloading it for free, the labels say revenues from it are poor, and suggest it’s having a detrimental effect on sales through other channels. Wired — Jack Marshalll @JackMarshall