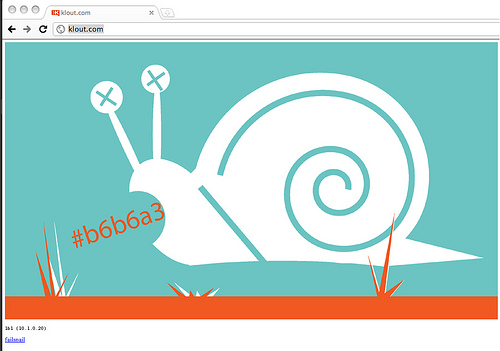 Klout on the Defensive: Social media-influence metrics company Klout has to be one of the more divisive startups in the digital media industry. Some see it as a Holy Grail of sorts, providing the kind of repeatable influencer marketing programs to do word-of-mouth campaigns at any sort of scale. Others see smoke and mirrors. Klout was recently dinged for its practice of opting in people to its scoring service. This ensnared some minors accidentally. It was just the spark needed for Klout doubters to come out of the woodwork. CEO Joe Fernandez responded in a tightly controlled Q&A. The crux of his argument is familiar: Klout made some minor errors, not many people were affected. The larger question is whether Klout can be more transparent about how its algorithms determine influence. It’s tempting to say Google doesn’t publish its ranking criteria, but Google’s search algorithm began as a peer-reviewed computer science project. Nobody really knows what’s behind Klout’s. Social Media Today — Brian Morrissey  @bmorrisseyBrands Need to Stay Social on Facebook: Brands that ignore the basics about social media end up paying the price offline, according to CNN Money. A recent study by London-based Conversocial, an analytics firm, showed that many major brands are completely ignoring complaints from consumers online, never responding to repeated posts about product problems or customer service issues. That can make a social media fan page a lethal weapon against brands, when consumers begin to feel slighted, in a very public way. Perhaps in the massive hype surrounding social, brands have forgotten that social media branding is about being in the midst of the conversation, not just likes.  CNN Money — Carla Rover @carlarover

B2B is Hot Again Among VCs: Over the past few years, B2B Internet companies have seen significant interest from investors, with social networking, gaming and mobile-focused firms receiving millions in funding. Now, though, investor interest is turning to B2B startups, and funding directed at those businesses is on the rise. Recent investments in mobile and advertising technology companies are evidence of that trend, for example, as is Groupon’s successful IPO earlier this month. WSJ — Jack Marshall @JackMarshall

Video Search Wars Renewed: Microsoft, in an interesting move, just purchased the video search startup VideoSurf for $70 million. Gigaom says the deal is all about improving the user experience for Xbox and Xbox Live, which makes plenty of sense, given all the content deals Xbox is inking. The key to keeping the Xbox experience great is making it easy to weed through for consumers and keeping clutter to a minimum. But what about video search for the Web? Could VideoSurf’s technology be used to improve Bing? What about Hulu — which has won a ton of praise for its interface, though its search functionality can be frustrating. Nobody has really nailed video search on the Web. Not Google, not Yahoo. AOL was supposed to be on the cusp of changing video search when it purchased Truveo back in 2006. It’s hardly made an impact over the past five years. Gigaom — Mike Shields @digitalshields
Non-iPad Tablets Struggle: Although Apple has certainly had a target on its back since the introduction and enormous success of the iPad, no company has been able to even come close to Apple’s success in the market it created. According to new research from the NPD Group, the non-iPad tablet market is very, very small. Only 1.2 million tablets of the non-Apple variety were sold in the first 10 months of 2011, and even that paltry number is somewhat misleading, because 17 percent of those tablets were the HP models that the company sold at a cut rate as it was getting out of the tablet business.
AllThingsD— Anne Sherber @annesherber
https://digiday.com/?p=1745
Most Read
Trending in
Digiday Top Stories
Go to mobile version