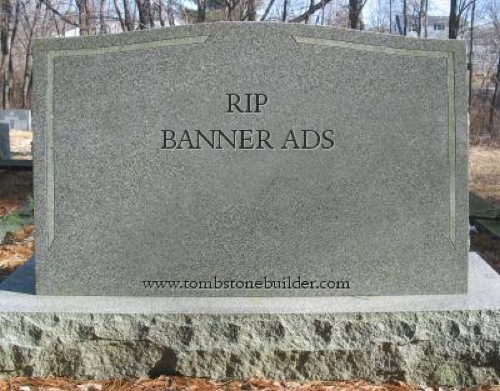 Bye-Bye Banners?: In our recent series about the Web attracting more brands, we asked whether banner ads are the answer. It’s not an idle question, as services like Twitter, Foursquare and even Facebook are redefining how Web advertising might work. The banner ad, after all, has been an abject failure if you measure success based on engagement. Andrew Weissman, a partner at Union Square Ventures, believes we’re entering a post-banner era where services form advertising experiences around how regular people actually use them instead of just slapping banners up to fleetingly intercept their attention. The problem they’ll find is, unless they reach great scale, there’s an entire online advertising industrial complex built to perpetuate the banner as the bedrock of Web advertising. aweissman.com –Brian Morrissey  @bmorrisseyCord-Nevers: While much of the recent focus in the cable business has been whether cord-cutting is indeed a real phenomenon, most of the evidence to date has painted cord-cutting (the act of ditching cable in exchange for over-the-top services like Netflix, Hulu Plus and Roku) as being mostly mythical. Cable MSOs have lost some subscribers over the past few years, but there’s hardly been a flood of drop outs. Turns out cable is still a pretty good deal for most folks. That is, unless you never had it. According to Ad Age, there is a rising number of cord-nevers, including a large number of younger people, who are comfortable piece-mealing their TV experience together, and are unlikely to get cable in the foreseeable future. What will be interesting to see, and tough to gauge, is whether cord-neverness actually sticks as a lifestyle choice as Gen Y’ers get older, or whether it’s just a more convenient, attractively frugal choice during one’s salad days. Ad Age — Mike Shields @digitalshields

Twitter Plays the Activist Card: Twitter announced today the acquisition of Whisper Systems, a micro-startup that creates technology that protects texts and mobile calls from third-party prying eyes. Twitter’s role in the Arab Spring was roundly trumpeted by the press this year and brought the company out of Facebook’s shadow, a bit. Perhaps with an eye to contrasting Facebook’s fairly open relationship with monitoring agencies, the company is making moves towards being branded as an activist-friendly platform with the ability to employ privacy controls, via tech like that of Whisper Systems, that may stump the dictatorship, ruler or whoever is on the wrong side of the crowds. WSJ  — Carla Rover @carlarover

Facebook Under Fire in Europe: As the volume of user information harvested by Facebook continues to grow, the social network could soon find itself subject to substantial privacy-related scrutiny in Europe. The company collects an array of information about its users for ad targeting purposes, but isn’t always transparent about how the data is used according to the Commission’s vice president Vivianne Redding. As a result, a new directive set to be introduced in January could ban targeted advertising on the site altogether unless users specifically allow it. Telegraph — Jack Marshall @JackMarshall

The Coal Mines of Silicon Valley: As Zynga slouches toward its IPO, there are signs that many of the social gaming giant’s employees are not happy campers. Even as Silicon Valley deals with a shortage of programmers by extending ever more outrageous offers to kids a month out of Stanford, Zynga’s employees are missing the coddling and freebies that their counterparts receive at other companies. Meanwhile, competitors are waiting until the company’s IPO is finally issued so that employees can cash out their stock before jumping ship.  NYT — Anne Sherber @annesherber