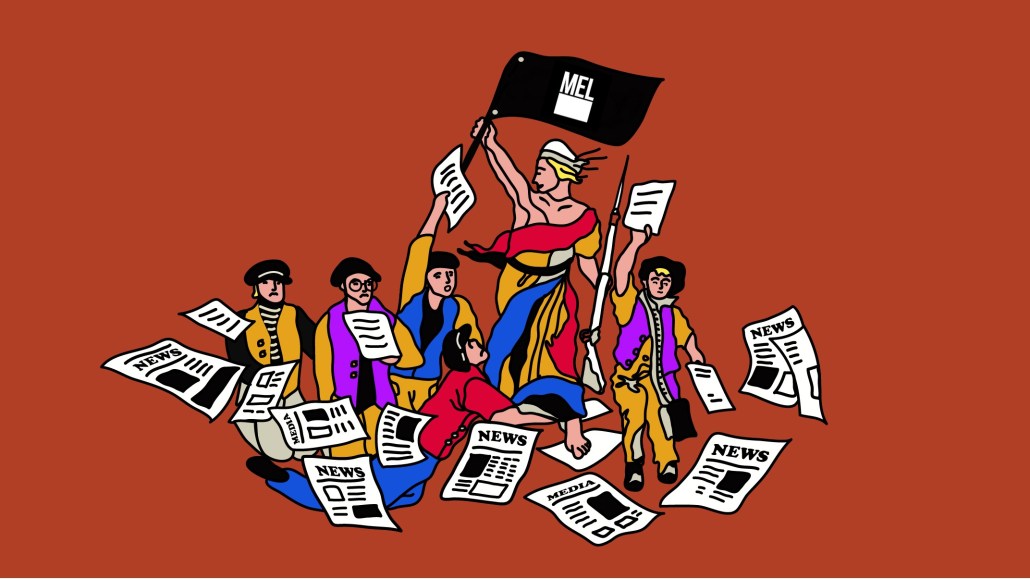 Last week, Dollar Shave Club announced that in 60 days it would end its financial relationship with its men’s interest publication, Mel Magazine, after six years in an effort to “better focus on our consumer business,” according to a statement provided to Digiday. Since that announcement, there has been “interested expressed” to purchase Mel, according to a spokesperson, though the company declined to share how many inquires it has received or where those inquiries have come from.

Since its founding in 2015, the magazine, which is reportedly seeking a buyer, aimed to revamp what a men’s interest publication would cover and fill a “white space in the men’s lifestyle content market,” founding editor Josh Schollmeyer previously told Digiday. (Schollmeyer and his team did not respond to a request for comment by the time of publication.)

While the future of Mel is still uncertain, the impact of the branded publication, which differentiated itself from other brand-backed titles with its unique coverage of masculinity, sex, pop culture and more, will remain. Industry insiders and fans believe it will be remembered for its independent voice rather than simply being yet another branded mouth piece; brands like Airbnb, Casper and Away also previously ventured into brand-backed publications, but have since shuttered or significantly reduced those publications’ output.

“It’s never been there just to push razors,” Schollmeyer previously told Digiday. “It’s been there to be a thought leader on modern masculinity.”

But that supposed independence from product sales may be part of the reason the company has now cut ties with the publication, as proving a return on investment for the brand may have proved difficult, according to agency execs and industry observers. Without a clear ROI for the mother brand, branded publications are unlikely to survive.

“Dedicated audience or not, is it driving ROI or is it becoming a distraction?,” said Jordan Cohen, founder and CEO of brand consultancy and agency The Fox Hill Group. “Is it moving the needle on sales or are other channels lower investment and higher return? These are the questions that brands have to ask themselves (and do ask themselves) when putting out a publication.”

Without sales figures to boost a brand’s product via a publication, brands often reconsider investing dollars that could be spent on more traditional marketing channels.

Duncan continued: “Publications are about affinity, advocacy and brand love — the ROI is rarely black and white. Publications should be viewed as long-term investments, measured against long-term goals.”

“It becomes an issue of whether a brand can justify the investment —especially as it grows and efficiency becomes the focus — as the true benefit to the brand often is intangible or at least hard to quantify,” said Garret Duncan, strategy director at creative shop Made Thought.

As for Mel in particular, it’s unclear what changed at Dollar Shave Club to shift the brand away from the publication. “[Dollar Shave Club] tried to exhaust all options before making the decision to cease publication,” said the spokesperson. “We remain committed to doing everything we can to support them in the transition.”

Until recently, this audience number did not really matter from a monetization perspective, since the magazine does not sell advertising or subscriptions, But Mel had started to get into paid newsletters earlier this month, representing the branded magazine’s first foray into paid content, according to a report by Adweek.

And from a media buyer’s perspective, there are brand safety concerns around the content that Mel publishes, with articles that cover everything from sex to personal health care. Because of that, keyword blocklists could definitely hinder the brand’s attempt at programmatic monetization.

“This editorial team clearly takes an unabashed approach to being male focused and [isn’t] afraid to tackle edgy subjects or fresh angles — that’s really not going to be right for every brand out there,” said Greg James, global chief strategy officer at Havas Media. “For some brands, context in more ‘grown up’ areas might be beneficial and appropriate. For planners and buyers it’s a ‘tread with care’ message.”

“Having worked on branded publications myself, it’s very rare that a publication like that can do the work that Mel did. Branded publications tend to be narrow and watered down, but Mel was an incredible, indie brand,” said Taylor Lorenz, a technology reporter with the New York Times.

Lorenz said that her beat, which covers internet culture, was largely influenced by the stories that Mel was willing to publish, adding that it was often the first publication to cover topics that might have been considered “taboo” or “not mainstream enough” by larger legacy publications.

“Their coverage of sex work and OnlyFans was so ground breaking and made it so that other publications could take that stuff seriously,” Lorenz said, adding that Mel was one of the first publications to cover TikTok star Charli D’Amelio. “Things there would percolate into big national stories.”

Those stories were incredibly important to readers as well.

The editors’ willingness to explore these topics created a “haven” for freelancers and aspiring writers, according to freelancer Jordan Hoffman. “Mel wasn’t my main gig, but I loved it because it wasn’t my main gig. There was no idea that was too nuts to pitch,” he said.

While Hoffman primarily covers film, he said that he was able to cover movies that were way too niche for most publications, like why a 7.5-hour long Hungairan movie was worth watching, as well as covering topics completely unrelated, such as the origin of the party mix snack.

The other reason why Hoffman said Mel was one of his favorite outlets was because they paid their freelancers well thanks to the “deep pocket of Unilever behind them.” For a story Hoffman would classify as a “typical” assignment, he said Mel would pay him $350, where a publisher like The Guardian would pay closer to $250.

Other reporters are expressing concern that what happened with Mel could be a trend felt across the industry.

Jack Crosbie, writer and co-owner of worker-owned collective media organization Discourse Blog, said that there are many publications, including legacy titles like the Washington Post and Time, that are owned by a single benefactor who are willing to operate a media company at a loss. And despite unions and diversified business models, they too, could be at risk.

“I want to work in an industry where the future of a publication like [Mel] isn’t determined by the whims of the board of directors of some direct-to-consumer brand. What they offer is worth more than the profit line that they provide,” said Crosbie.

https://digiday.com/?p=408730
Most Read
Trending in Beyond Ads
Digiday Top Stories