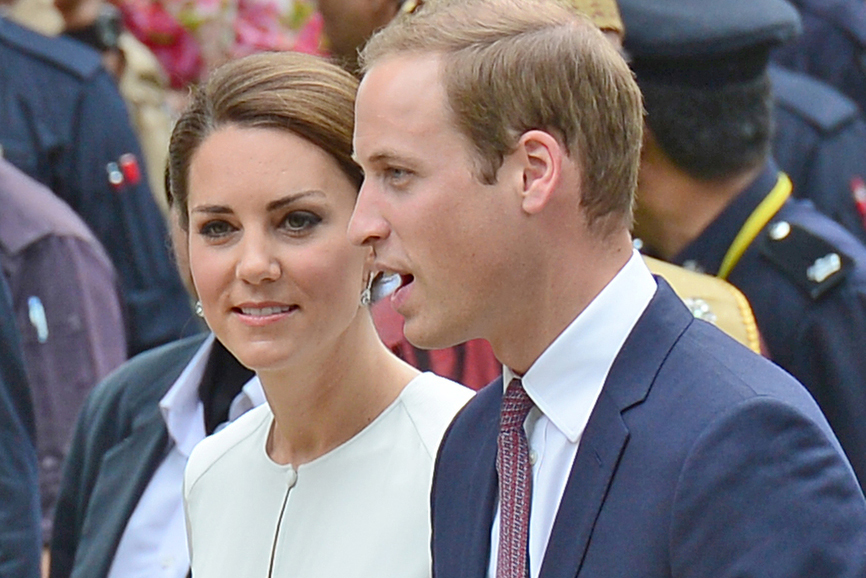 Apparently peeved he had been stationed outside the hospital where Kate Middleton was expected to give birth, veteran BBC newsman Simon McCoy looked into the camera and started reading off a series of angry text messages his station had received over the course of the day.

“Come on, BBC, people do have babies,” McCoy read. “Stop saying the same thing over and over; give us the rest of the news.”

“What a load of sycophantic rubbish,” he continued.

“’God help us if this ends up a long labor.”

McCoy, looking amused by the messages that seemed to echo his own viewpoint, gave viewers an idea of when the baby was expected to be born and added: “Until then, we’re going to be speculating about this royal birth with no facts to handle the moment.”

McCoy’s experience was a good window into the challenges that confronted news organizations as they covered the birth of the royal baby yesterday. There was little newsworthy until the actual baby was born, and not much more once he finally arrived. So the organizations’ attempt to milk the anticipation for ratings and traffic led to both great creativity and spectacular awkwardness. But the potential payoff was great: Mail Online’s global CMO, Sean O’Neal, told Digiday that his site’s direct home page traffic was up 20-25 percent over the course of the day.

As the news media organizations gave it their best, Digiday looked on. Here’s our list of the good, the bad and the very ugly from yesterday’s baby watching coverage.

The Guardian
Grade: A+

The Guardian gets it. They understand that a segment of its readers would be annoyed by wall-to-wall royal-baby coverage, so the paper gave them some recourse. “Not a royalist?” asked the Guardian above its royal baby section. The question served as an on/off switch. A click would collapse the section, and another would restore it. Without the royal-baby coverage, readers could still easily access the site’s important news, such as A-Rod’s delayed return to the Yankees.

The British Broadcasting Corporation gets high marks for keeping the salty Simon McCoy on the air throughout the day. “Plenty more to come from here, of course,” McCoy told viewers at another point of the broadcast. “None of it news, because that will come from Buckingham Palace. But that won’t stop us.” News is supposed to be grounded in truth, and, in BBC’s case, it was.

“When will the Royal Baby will arrive?” tweeted Circa news director Dave Cohn. “Glue yourself to a tv for baseless speculation or just follow the @circa story.” Sure, Cohn is in the can for Circa; he works there. But the mobile news app was useful and understated, a good alternative to the blathering punditry on television (more on that later). Circa grabbed the most important nuggets of the story and aggregated them, bit by bit, in an easy-to-read central story page.

When will the Royal Baby will arrive? Glue yourself to a tv for baseless speculation or just follow the @circa story https://t.co/9mj114PKId

This site focused on the key part of the story and reported it with both accuracy and speed. It used two words the entire day, “Nope” and “Rejoice,” but told us all we needed to know.

The media company formerly known as America Online proved just how out of touch it is with British culture by playing both sides of the royal-baby fence. AOL’s official Twitter account asked followers to retweet it if they thought the royal baby would be a boy and, in a subsequent tweet, to do the same if they thought it would be a girl. So, AOL was really just asking for retweets. Slick move, but we’re not falling for it.

In what easily ranks as the most boring live feed of all time, The Telegraph streamed a live shot of the doors of St. Mary’s hospital, waiting for an announcement of the baby’s birth. For hours, viewers were treated to a view of the doors, closed and hardly worth looking at. By the time the royal family sent out an easel with the announcement, the world already knew of the baby’s birth and sex. Thanks Twitter.

Digital journalists rang in the royal birth by heaping generous amounts of shameless SEO upon it. Gawker won the day with this wonderful headline: “What Time Is the Royal Baby?” The headline, an apparently dig at craven SEO plays like “What time is the Super Bowl,” netted Gawker thousands of pageviews even as it needled its counterparts. Gawker’s Hamilton Nolan also called for the imprisonment of the royal family on this auspicious day. “In a just world,” he wrote, “this innocent child would be going up for adoption.” Yeesh.

Leave it to CNN to cover the royal baby by sending a reporter into the hospital room of a woman about to give birth and sticking a microphone in her face between huffs of laughing gas. “It doesn’t make you laugh though, even though it’s laughing gas,” pregnant mother April Richards told CNN as she tried to stave off the pain. We could have used some laughing gas ourselves to get through that segment.