The 2 train stalled out at 14th St. Tuesday night, and I started to panic. There was no way I was going to get uptown in time for my interview with one of the hottest cover girls of the moment. I was promised just 10 minutes with her before the awards show started – she would be on hand to accept a lifetime achievement award.

Luckily, the subway gods were smiling and before long the train lurched forward. I made it to the red carpet just in time to meet Grumpy Cat. 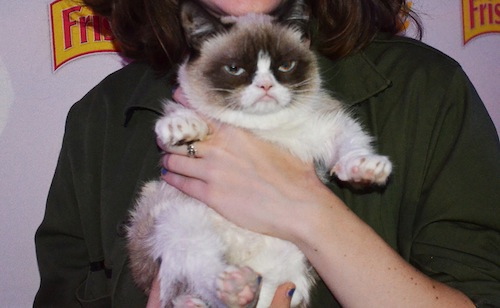 Maybe you’ve heard of her. In just under a year since having her photo first uploaded to reddit, Grumpy Cat has morphed into a full-fledged celebrity – and profitable brand. She is the new face of Friskies and has graced the pages of The Wall Street Journal and landed on the cover of New York Magazine’s “Boom Brands 2013” issue, which estimated her net worth at $1 million and growing.

As of this week, she has 116,000 followers on Twitter (that’s more than  Trident Gum and Denny’s), 113,000 followers on Instagram (more than Walgreens) and more than 1.6 million fans on Facebook. It’s little wonder that Friskies, with its comparatively few Twitter followers and Facebook fans, wanted to hitch its wagon to this outwardly taciturn star.

But these days, Grumpy Cat isn’t an easy feline to get whisker time with. Digiday first reached out to the powers that be at Grumpuccino, a Grumpy Cat-branded bottled coffee drink, in the beginning of September. The company in turn connected us with Ben Lashes, Grumpy Cat’s manager, who didn’t immediately get back to Digiday. He may have been too busy handling one of his other high-profile clients: Keyboard Cat, Nyan Cat, Scumbag Steve or Ridiculously Photogenic Guy.

Lashes ultimately put us in touch with Friskies. Luckily, the Arizona-based cat would be traveling to New York on behalf of the cat food company to attend its eponymous awards show, The Friskies – the Golden Globes of online cat videos. Finally, after weeks of wrangling, an interview was scheduled. Time would be brief. Grumpy Cat had obligations.

At Arena, the Times Square venue where the Friskies awards were held Oct. 15, I was ushered downstairs to a buzzing lounge. Comedian Michael Ian Black, the evening’s host, passed by in formal attire. Groups of women sporting cat-ear headbands lingered around the room.

And there, swarmed by press and fans clamoring for photos and a feel, on a purple cushion atop a wooden stool, curled in an unperturbed fluffy ball, lay Grumpy Cat. 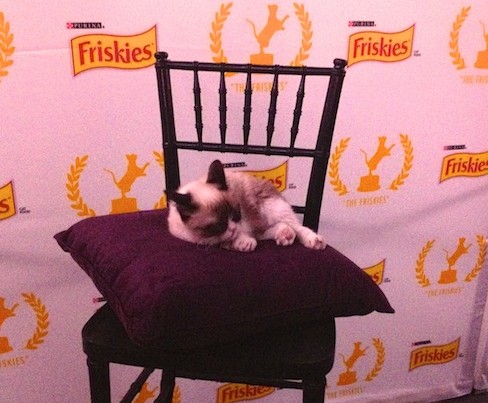 For all of her outsized fame, Grumpy Cat (nee Tardar Sauce), is a lot smaller in real life than you’d expect. And she is not, despite the permanent frown that won her her moniker and fame, particularly grumpy. It’s tough to know for sure, but fame does not seem to have changed her.

“She travels really well, when I get her carrier out, she actually gets really excited — and you see how she is now: She’s really calm,” Tabatha Bundesen, Grumpy Cat’s owner, told Digiday as the star of the evening perched nearby. “During the daytime she lays around, but at night it’s a different story. If we did an interview or event at 3 a.m., she’d be bouncing off the walls.”

As Grumpy Cat’s story goes, in September of last year, Bryan Bundesen, Tabatha’s brother and now head of the business side of the Grumpy Cat brand, posted a picture of his sister’s funny cat to reddit, the so-called “front page of the Internet.” Tardar Sauce was born with feline dwarfism and an underbite. The combination has produced the seemingly permanent frown on the cat’s face. A reddit user gave Tardar Sauce the sobriquet Grumpy Cat. The rest is meme history.

“I thought it would get some laughs and people would think she is cute, but I didn’t expect this at all,” said Bryan Bundensen. “We started out with t-shirts because that’s what people were asking for. Then people started asking for more photos, so we started the site and it’s just grown from there.”

Grown it has. Today, there’s Grumpy Cat apparel and calendars and mugs. There’s the Grumpuccino beverage line, which Bryan says has been getting a lot of orders online and positive feedback from consumers (you can buy a three-bottle sampler pack for $8.95 or a case of 12 for $34.99). There’s also a Grumpy Cat book (“Grumpy Cat: A Grumpy Cat Book,” which sells for $10.17 on Amazon) and, according to Bryan, they are in talks with publisher Chronicle Books for a second book.

Oh, and Grumpy Cat has also signed a movie deal.

What is most remarkable about Grumpy Cat — well, really, the Bundesens and manager Ben Lashes — is that they seem to be pulling off the impossible: turning something as ephemeral as a meme into an established brand. At just 18-months old, she could very well be with us for many years to come.

“We hope the brand keeps growing — we hope it’s like Garfield where even when you don’t think about it on a day-to-day basis, it’s still pretty big and you still see the merchandise,” said Bryan. “We’re hoping she turns into that.”

The most profitable venture so far has been the Friskies deal, according to the Bundesens. They wouldn’t disclose the terms of the deal, but Tabatha was able to quit a 10-year run as a Red Lobster waitress to manage Grumpy Cat full time.

“Friskies,” she told Digiday, “takes really good care of us.”