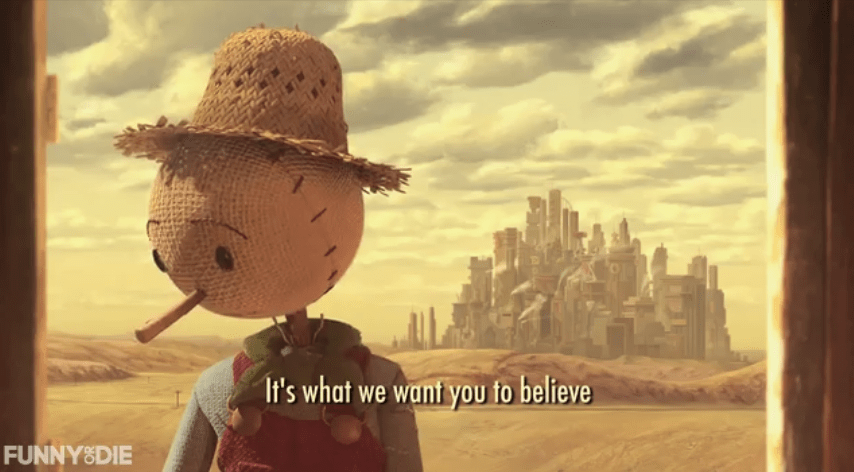 By now you’ve probably seen the much talked about somber Chipotle animated short “Scarecrow.” The viral ad features Fiona Apple singing a haunting cover of “Pure Imagination” from the original Willy Wonka and the Chocolate Factory. In the ad a scarecrow searches for fresh ingredients to eat rather than support Big Food and the inhumane treatment of animals — one scene features a sad cow trapped in a metal contraption.

While many have lauded Chipotle for its artsy and moving ad that takes a stand against industrial food production, it was inevitable that someone spoof the fast-food brand’s high-principled video. Enter Funny or Die.

The comedy video site created a spoof of the Chiptole ad called “Honest Scarecrow,” which has the same animation as the original, but instead of Fiona Apple singing “Pure Imagination,” Funny or Die replaced the lyrics with its own version of what it thinks Chipotle is really up to: namely, a big corporation using a big budget to create a tear-jerker of an ad.

For example, the spoof version’s song opens with the line: “Come with us and you’ll be in a world of pure imagination with an ad made for you by a giant corporation… What you’ll see will be pure manipulation.”

The parody version, which was published two days ago, already has 130,000 views. Watch for yourself and let us know if you agree that Chipotle is being just a tad manipulative, if not downright cynical: